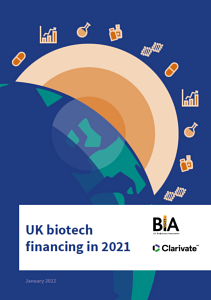 The latest UK Biotech Financing Report, published by the BioIndustry Association (BIA) and Clarivate, shows 2021 was the highest year on record for investments into UK biotech and life sciences companies.

Although venture capital made up a greater proportion of the total raised, it is the number and scale of IPOs that mark out the year as distinctly different to what the UK has seen before, with a remarkable increase from the £244 million raised in 2020. Listings of UK companies on markets on both sides of the Atlantic suggest an ecosystem reaching maturity, and the record-breaking levels of venture investment shows a strong pipeline of companies coming through.

Download the UK biotech financing in 2021 Report for more information and get in touch with Dr Martin Turner, Head of Policy and Public Affairs [email protected] if you have any questions.