Dr Martin Turner, Head of Policy and Public Affairs at BIA wrote an update on what this means for our members.

This will effectively halve the value of the scheme for a loss-making life sciences company, severely reducing the support the government provides for start-ups and scale-ups and the incentive to invest in R&D. We’ve already been contacted by many members concerned about this.

It is important to note that these rate changes will be legislated for in the Autumn Finance Bill 2022 so are not effective immediately. We have already spoken to HM Treasury, HMRC and Downing Street to express our strong concerns about the impact this could have.

We have been promised there will be further consultation with us and officials have said they want to introduce “more targeted” support measures for “R&D intensive SMEs”. We will engage fully in that conversation and make proposals, but will also be mounting a public response to the initial announcement. Our press statement is below, we will be talking to MPs and ministers in the coming days and working with our members to raise our sector’s concerns. If you’d like to contact your MP in the meantime, you can do so here.

“Just weeks after official government statistics showed SMEs are investing £16 billion more than previously thought in R&D to create the UK’s innovation-based economy of the future, the Chancellor and Prime Minister are threatening to pull the carpet out from under their feet by almost halving the value of R&D tax reliefs. This unsophisticated measure, which hasn’t yet been consulted on, will not achieve the Chancellor’s stated aim to cut down on fraud. Stopping the “no win no fee” tax consultants clogging up HMRC with bogus claims would have had an immediate impact.

“The unintended consequences of this proposal for the UK life science sector would, if legislated for, be hugely significant. Our world-leading science base holds great promise for improving the health and wealth of the nation, as the rapid development of the Oxford-AstraZeneca vaccine showed, the translation of that research into societal benefit via innovative SMEs can’t be put at risk.

“We are providing expert analysis of the implications of this proposed move to HM Treasury officials and ministers this afternoon and we look forward to meetings on the detail in the coming days.”

The Government have described the changes as “a step towards a simplified, single RDEC-like scheme for all”, adding “the government will consult on the design of a single scheme, and ahead of Budget work with industry to understand whether further support is necessary for R&D intensive SMEs, without significant change to the overall cost envelope for supporting R&D.”

We have previously argued against a single RDEC-like scheme, which would not rightly reflect the different contributions of and challenges for SMEs in the UK’s innovation ecosystem, compared to large companies.

As previously announced at Autumn Budget 2021, the R&D tax reliefs will be reformed by expanding qualifying expenditure to include data and cloud costs, refocusing support towards innovation in the UK, and targeting abuse and improving compliance. The changes to refocus innovation towards the UK by restricting claims for overseas activity is another concern for us and our members, which we have been campaigning against. These changes will be legislated for in Spring Finance Bill 2023, which creates further unhelpful uncertainty for companies about their tax positions in the near future. We are urging HMRC to introduce transitional arrangements and issue guidance urgently.

Elsewhere in the Autumn Statement, the Government recommitted to raising its own investment in R&D to £20 billion per year by 2024/25, as Jeremy Hunt said he wanted to “combine our technology and science brilliance with our formidable financial services to turn Britain into the world’s next Silicon Valley”.

Funding for the UK’s nine Catapults will increase by 35% compared to the last 5-year funding cycle and Investment Zones will now be more focused to catalyse a limited number of the highest potential knowledge-intensive growth clusters, including through leveraging local research strengths.

The Autumn Statement also confirmed the Seed Enterprise Investment Scheme (SEIS) will still be made more generous and the Government is still committed to continuing the Enterprise Investment Scheme (EIS) and Venture Capital Trusts (VCTs), also seeing value in “extending them in the future”. It is not clear whether that means making them more generous or extending them beyond 2025, which is when they are due to end.

We share our members’ concerns about the proposed changes to R&D tax reliefs and will be working hard in the coming weeks and months to address those concerns. Please keep a look out for further communications from us soon on how you can help.

Join the BIA webinar: R&D tax relief changes in the Autumn Statement on 29 November at 12 pm.

All the Autumn Statement documents can be found on the HM Treasury website. 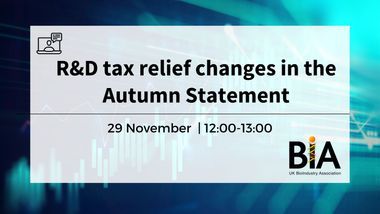